Religious tourism is also referred to as pilgrimage tourism, where the primary purpose of travel is for pilgrimage to Temples, Churches or Masjids. East Godavari is a notable place with its rich and varied temples and shrines. It is a place of rich tradition, heritage and historical significance. Here, we provide a list of some historical, most visited and famous pilgrimages in East Godavari district along with their details. 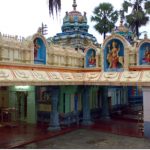 AINAVILLI It is located at a distance of 72km from Kakinada. It is a land of unspoiled beauty which oozes of history. It is dedicated to Sri Siddhi Vinayaka Swamy. Devotees take a vow to visit the temple again if their wishes are fulfilled. It has two gopurams (towers) sculpted skillfully with tales and idols. It is said that the Vyasa Maharishi installed the Ganapathi idol. 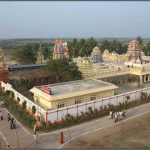 ANTHARVEDI It is located about 130kms from Kakinada. It is flanked by beautiful waters of sea to the east, Godavari to the west and Raktakulya River to the north. There are some well known spots belonging to this holy shrine such as Sagar Sangam and Chakrateertham. It is also called Mukti Kshetra of Lord Narasimha and the Annual Mela runs for about nine days when Antarvedi seems to be the Kaliyuga Vaikunta. 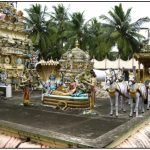 APPANAPALLI A remote village in Mamidikuru which is 72kms from Kakinada via Yanam. Being the abode of Lord Balaji, it has acquired reputation as second Tirupati of Konaseema. It is flanked by Godavari on 3 sides. We can find good accommodation at decent guest houses & TTD Choultries. This shrine derives its name after a Rishi. 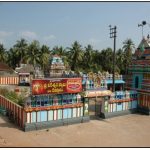 MURAMALLA Muramalla is located about 20km from Amalapuram and is home to the popular shrine Sri Veereswara Swamy Vari Idol which attracts people. It is believed that devotees who still haven’t got married, who find it difficult to get good proposals, get married with just a mere visit to this temple. Not only that, childless couples, and couples who do not get along believe to find respite here. 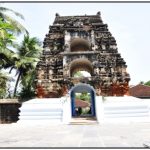 PALIVELA Palivela is located about 90km from Kakinada is known for the temple where Lord Uma Kouppulingeswara Swamy idol is situated. It is believed that the idol was installed by Maharshi Agastya. There used to be 7 Mandapas which are named after 7 days of the week. 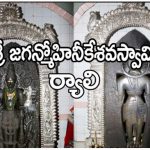 RYALI Ryali is located 74km from Kakinada. It is an enchanting place situated between the rivers Vashista and Gowtami. In this temple the exquisite idol of Jaganadh Swamy is made of black stone. It has MahaVishnu in front and Jagan Mohini on back side and can also catch a glimpse of ten incarnations of concerts, Thumbara, Narada, Rambha, Urvasi, Garuda, Ganga and many more. This shrine is referred as “Swayambhu” 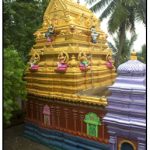 VANAPALLI Vanapalli is located about 21km from Amalapuram and 70km from Kakinada via Ravulapalem. The temple of lord ‘Pallalamma’ Ammavaru is said to have divine powers of healing. A statue of jackal was found under the idol. 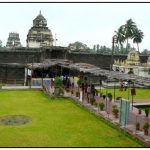 DRAKSHARAMA Draksharama is located 28km from Kakinada, situated on the Eastern bank of Godavari. It’s history of sacred pilgrimage dealt within Skanda Purana. It is a rare view where god & goddess (Astadasa Shakti Petas) equally shower blessings. There is one such in Varanasi, second in SriSailam and third in Draksharama with Bhimanatha and Manikyamba. This is ‘Swayambhu’ and is one of the ‘Pancharamas’. 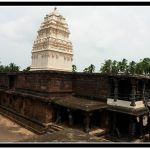 SAMALKOT Samalkot is about 12kms from Kakinada. It is famous and one of the ‘Pancharamas’. This was built in the 9th century. Lord Bhimeswara Swamy appears as Ekashila Shiva Linga along with Ekashila Nandi. Darshan of Shiva Linga is at first floor, along with goddess shri Bala Tripura Sundari, and Pushkarini (lake) can be seen. 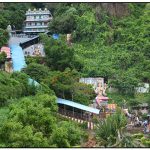 TALUPULAMMA LOVA Talupulamma Lova is often claimed as “gods own district” located not far from Annavaram town. It is abode of Talupulamma Thalli. People believe she would protect from accidents and dangers. It is said to be “Swayambhu”. It is a fascinating and irresistible destination for lovers of nature and adventure and is located 70km from Kakinada.

PANDAVULA METTA Pandavula Metta is a hillock nearer to Peddapuram. This hill was in midst of a jungle. It is believed that Pandavas had lived here for some time during their exile. One can also see Bhimas feet even today. One should climb 108 steps to reach the temple and can find two natural caves on hill facing east. It is about 20kms from Kakinada. 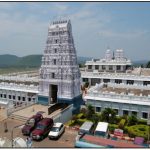 ANNAVARAM Annavaram is one of the most famous holy shrines enjoying popularity next to Tirupati. The temple is built in Dravidian style. The Lord Satyadeva with Anantha Lakshmi and Lord Shiva on other side took his abode on Ratnagiri. Every Hindu performs ‘Sri Satya Narayana Vratham’ throughout India for wealth, education and success. Especially, the newly married couple comes here and performs poojas for good and healthy relationship. It is also very famous for the god’s “prasadam” which is served in dried leaves till today. 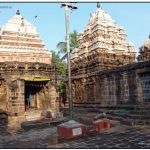 BIKKAVOLU Bikkavolu temple is dedicated to Lord Vinayaka. The main deity inside the temple is 7 feet tall. This is a “Swayambhu”. It is located 30kms from Kakinada. It is believed that the idol was installed during 849 AD and has been increasing year by year. Here the devotees whisper their wishes in lord’s ear. The other fascinating thing is the water that comes out from bottom portion of left leg of the lord. 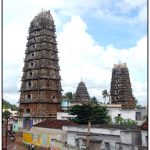 GOLLALA MAMIDADA Gollala Mamidada is located 20kms from Kakinada. It is in the midst of coconut groves and green fields. Suryanarayana Swamy temple is situated here. It has 170 feet high gopuram. The temple is situated in 16 acres. The whole gopuram consists of 100’s of carvings which are said to be an eye feast and takes lot of time to see every carving which is constructed based on different epics of god & goddess. It is also known as ‘Chinna Bhadrachalam’. 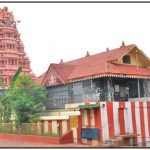 MARKANDEYA TEMPLE One of the ancient temples of Rajahmundry. It is about 70kms from Kakinada. The temple was rebuilt in 1818 which shows Lord Shiva along with all other deities in one place. It is located near Ghats of Godavari. Devotees generally have a dip in river Godavari before they enter the temple. 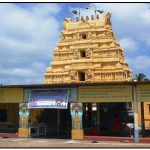 MANDAPALLI After the huge battle between demons & Shani, Shani won the battle. To get rid of ‘Bhramahatyapaatakam’, he installed a Shiva linga which he called Mandeswara Swamy. It is about 66km from Kakinada. Devotees offer prayers in wide range on “Shani Trayodhasi” believing that their sins are washed off. 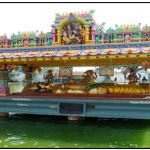 KUKKUTESWARA SWAMY TEMPLE It is dedicated to Lord Shiva. It is a ‘Swayambhu’ in the form of cock’s head. It is located in Pitapuram which is 56km away from Rajahmundry. People from many parts of the state throng to the temple during ‘Maha Shiva Raathri’. 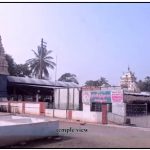 VADAPALLI Vadapalli is located 10km from Ravulapalem. The roof around the temple is filled with Govindanamaalu. It is believed Lord Venkateswara is pleased and fulfills their wishes if the devotees perform 11 pradakshinas. 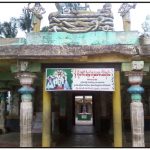 THOLI TIRUPATI This temple is 9000 years old, it is said that there are 108 Tirupatis throughout the country and this is the first of all. It is about 27km towards north from Kakinada. We can see smiling posture of Lord Venkateswara, Shanka & Chakra are in altered positions in comparison with other Balaji idols. 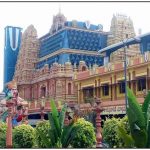 ANDHRA SABARIMALA This is a replica of Swamy Ayyappa temple at Kerala. It is about 64kms from Kakinada. It is said that the devotees who cannot go to Sabarimala (Kerala) can offer their prayers here. There are many other temples located in the same premises. 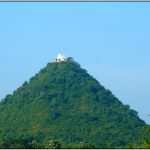 KORUKONDA It is located about 60kms from Kakinda and 25kms from Rajahmundry. It is an ancient historic temple known as Vaishnava Divya Kshetram. It is dedicated to Lord Vishnu. It is a ‘Swayambhu’ idol situated at the top of a hill which can be accessed only through long flight of 650 steps. The temple was constructed 800 years ago. 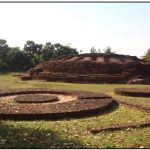 ADURRU (BUDDHA STUPAS) It is a 2400 year old Buddhist site located on the west of Vianetaya. Amongst the 3 most popular Buddhist Stupas in the world, the first is in Adurru, the second is in Ranchi and the last one in Sarnath. The famous Mahastupa was built like giant wheel with 17 feet diameter. 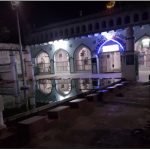 ROYAL MOSQUE The Royal Mosque which is situated in the midst of Rajahmundry was built in 1305A.D by Sumera Sahib son of Mohammad Bin Tughlak and is one of the oldest monument worth seeing. It has completed 700 years and it stood as a centre for religious harmony and brotherhood.